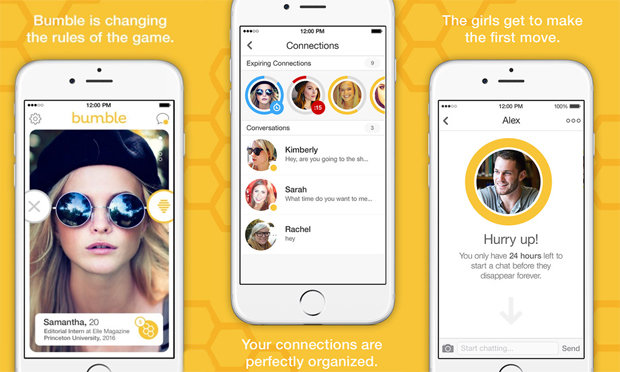 The Tinder app was created by a group of men and one woman (big surprise, right?). After slapping the CEO with a sexual harassment suit, and rightly so, Whitney Wolfe left the company to pursue her own dating app, which she calls Bumble. We’re a little weary of the name, the term “bumbling” comes to mind. Perhaps Bumble will overcome these shortcomings right out of the gate.

The new online dating app is touted as the “online dating app for women”. The app takes a “Sadie Hawkins” approach allowing women to make the first move on a potential match in a 24 hour window. The match goes away if the woman doesn’t reach out.

The process works similar to Tinder where two users opt in by swiping right. After the match they are added to each other’s “hive” of connections, which Bumble neatly organizes.

The app is currently only available on Apple devices, and not currently available for Android (yet). We definitely support empowering women, and Bumble is currently getting a lot of great support. We would recommend trying it out, it doesn’t take long to sign up and check out matches.

**Update: Bumble’s VP of Brand Development (The real @JenStith) was able to confirm that the below was a fake review as Bumble only shows first names.

The below iTunes reviews makes it seem like the company might be sneakily creating profiles with employees who aren’t looking to date.

Another reviewer comments on the immense amount of fake profiles.

**We’re really interested to dig into this further to see if it’s fake reviewers (or competitors) trying to bring down Bumble.

This is still a new app and some dating pool growth is needed. Would you use Bumble?