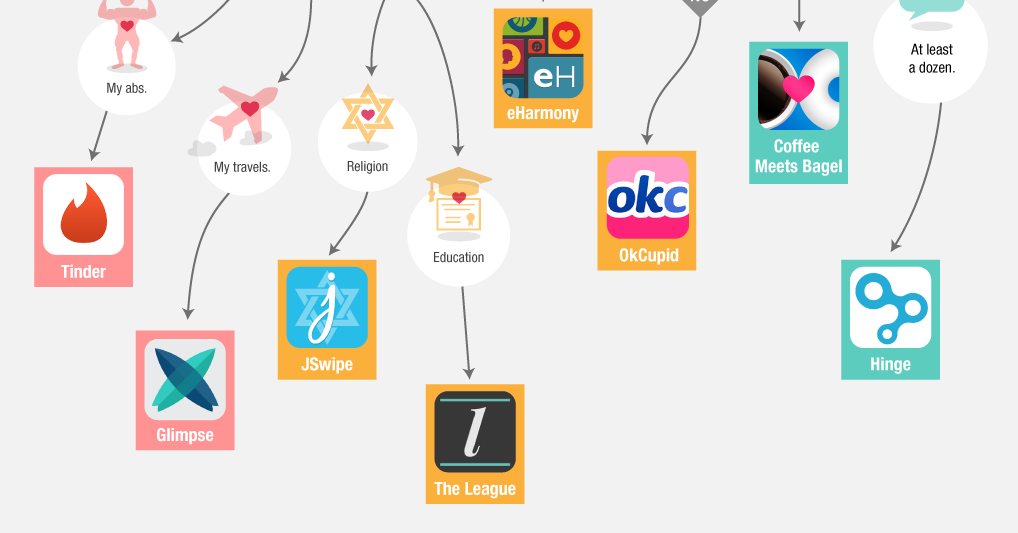 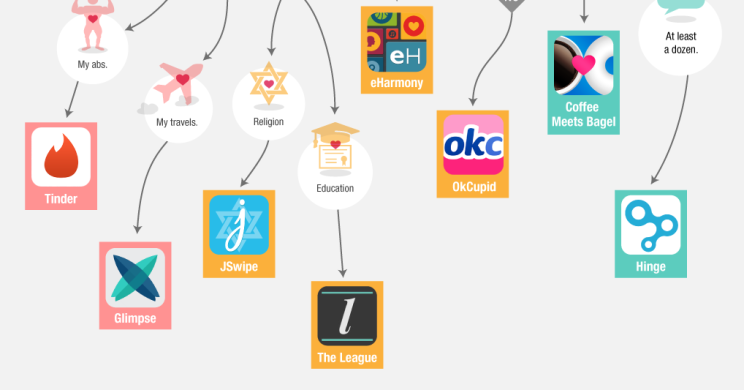 I know you, you’re cool, laid back and looking for Mr. or Mrs. Right. You want the dating app that’s going to bring your soulmate to your front door. You’re sick of swiping and swiping. You want a real relationship, not just a casual hookup where you pretend it’s cool, but secretly you long for more than a bed warmer.

CNN Money has put together this dating app infographic, to help you decide which dating app is right for you. However, we feel it’s a little singular, there are definitely other religion based dating apps besides Judaism(J-Swipe).

When approaching dating online it’s all about your approach, making sure your intentions are clear and putting your true self out there. We’ve put together some ideas on how to approach your first date.

This is our roadmap to your soulmate on the highway of dating apps:

Grindr: Is pretty well known as an app for “gay men”. It has a strong focus on hooking up, so also not a potential dating site for finding a relationship. It’s very similar to Tinder, but does have some technology issues where the app crashes.

Down Dating (formerly Bang with Friends): The name is pretty self explanatory, but it’s not for people looking for a long term relationship. This app also links to Facebook so you can have friends of friends.

Luxy: This app is about as superficial as it gets; users post “hot” pics of themselves, their favorite luxury brands and some of their hobbies. Luxy claims their dating base is made up of CEOs, models, athletes, and celebrities. Not your best shot at true love.

Tingle/Zoosk/Skout: All of these are very simlar where you meet up with people in your vicinity. They all have a reputation as being a “hookup” app. From personal experience we have never met any good matches this way. It sounds good in theory, but we’ve yet to see this work in real life.

Dating Apps in the Gray Area

Tinder: This app has really evolved over time. A couple years ago it would have been in the “avoid” list, but now there are thousands of couples that meet on Tinder. It’s all about intent. It’s important to perceive the other person’s intentions and make yours known. You don’t have to spell out that you’re looking for marriage, but do be up front that you’re not just looking to hook up. Definitely don’t go into dates thinking you can “change” their mind with your awesome personality.

Bumble: Is a dating app that emulates Sadie Hawkins, users mutually swipe each other, but it’s up to the woman to initiate the conversation. This app was created by one of the founder’s of Tinder so the features are very similar, but the woman controls the meet up portion.

Hinge: Is also very similar to Tinder, but only provides you with five matches everyday. It’s currently only available in Chicago, Boston, D.C., Philadelpha, San Francisco, and NYC.  It touts itself as a more mature version of Tinder.

Dating Apps to Use

HowAboutWe: It matches up people based on people who have posted similar date ideas, there’s no talking to this person before you meet up for your date. We feel like you would have to do a lot more work weeding out non-potential relationships because the app puts you our face to face before you talk to the person.

CoffeeMeetsBagel: This app sets you up with only one person a day based on your Facebook “friends of friends”. This app promotes a more casual interaction, since you meet for coffee, but it’s also limited to your Facebook reach. It’s a change of scenery from the typical “meet for drinks” don’t get drunk agenda.

Grouper: This is an app that charges $20 a date, but this pays for your first round of drinks. You pick two “wingmen” from your friends and then you get matched up with another group of three friends. It’s more relaxed and less stressful than the typical one-on-one.

OkCupid: OkC connects to Facebook and also allows you to build out a big profile of you interests and personality traits. This app/website service is free so there is a lot of people using the service for things other than just dating. Again be clear about your intentions.

Plenty Of Fish: There are over 55 million members on Plenty of Fish, which makes it fairly appealing. You can upload a profile with lots of details about yourself as well as pictures.  PoF asks you if you’re interested in people based on their pictures, and then shows you a list of who you would be most compatible with based on your profile.

If you want to try out another dating app we haven’t mentioned here make sure to look at a few things: how many users the app has currently, the number of downloads of the app and the app reviews. These three scores are usually a really good indicator of app maturity and if you will be successfully dating with the app.

What are your thoughts?